Annual figures and changes to the Board of Directors

Annual figures and changes to the Board of Directors

Ms. Corinne Granger joins the Board of Directors

Evry, 11 March, 2020 – The Board of Directors of Global Bioenergies (Euronext Growth: ALGBE) held today approved the annual financial statements for 2019, which have been audited by the Statutory Auditor[1]. The consolidated annual financial statements show a net loss of €12.7 million for the financial year 2019, compared to losses of €14.3 million and €13.6 million in 2017 and 2018, respectively. Ms Corinne Granger succeeds Crédit Mutuel Innovation (formerly CM-CIC Innovation) on the Board of Directors. Her co-option will be submitted for ratification at the next General Meeting.

Samuel Dubruque, Chief Financial Officer of Global Bioenergies, comments: “From a budgetary point of view, we have worked in 2019 to reduce expenses, which is reflected in the results published today by the improvement of the net income. The objective for 2020 is to achieve even higher operating income while reducing our expenses to the minimum necessary to reach our goal: the emergence of the first commercial unit of our process. In 2020, we will continue to improve this net income, with the main objective of shifting the company from R&D to industry and commerce.”

Marc Delcourt, Chief Executive Officer of Global Bioenergies, adds: “Our heartfelt thanks to Crédit Mutuel Innovation, and Karine Lignel in particular, for their loyal presence over the last seven years and their active contribution to the development of the Company. We welcome today Ms. Corinne Granger as an independent director. Her experience in the field of cosmetics will facilitate our access to this area, the first in which our products will be marketed.”

Corinne Granger says: “The Global Bioenergies process is unique, and will increase the naturalness of many cosmetic products. I will put my skills at the service of the Company to enable it to refine its strategy and facilitate its performance.” 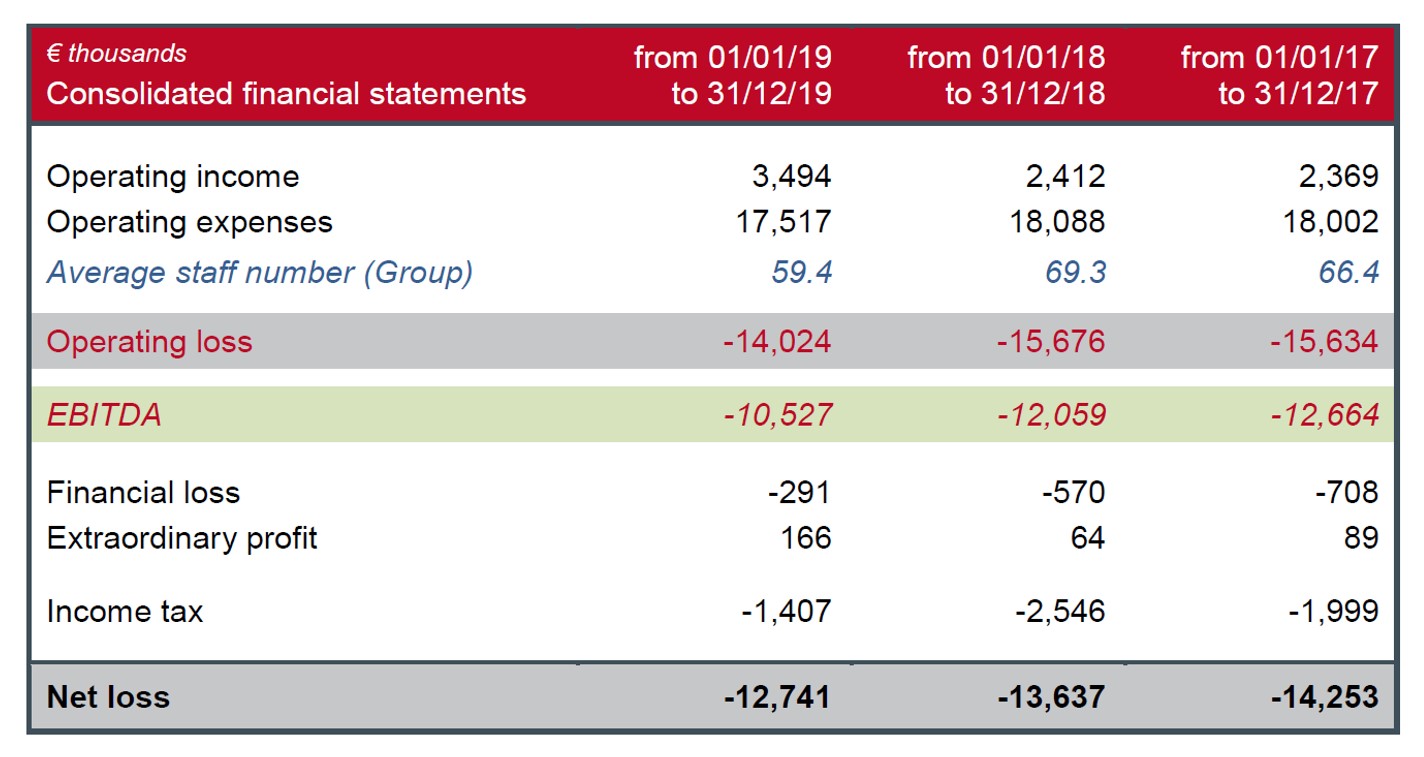 The net loss was €12.7 million, i.e. €0.9 million better than in 2018. The change is particularly visible in operating income, which reflects a year-on-year improvement of €1.65 million. The Research Tax Credit fell sharply due to the collection of French and European public fundings received during the year.

Operating income is mainly made up of the five European grants obtained in 2017 and 2018 associated with projects to diversify the resources available for the Isobutene process.

Operating expenses were again heavily impacted this year by depreciation and amortization expenses, particularly those for the Leuna demo plant (€2.9 million), which began on April 1, 2017 for a period of four years and will therefore cease at the end of the first quarter of 2021.

Tangible fixed assets decreased by €3.3 million due to material investments limited to less than 0.2 M€ in 2019, while depreciation represents €3.5 million, including €2.9 million for the Leuna demo plant alone.

The receipt, in October, of a €2.6 million repayable advance for Global Bioenergies SA and €0.5 million for IBN-One as part of the Isoprod project financed by ADEME maintains the conditional advances and loans at a level comparable to that of 2018, despite the periodic repayments made during 2019.

Current debts are in  a particularly healthy position at December 31, 2019, with a year-on-year reduction of more than €0.7 million, partly due to a reorganization of the invoicing processes of the Fraunhofer Institute to which the operation of the industrial demo plant in Leuna has been entrusted.

Deferred income (PCA), which had changed significantly between 2017 and 2018 due to the collection of pre-payments relating to the various European projects (as a reminder, approximately half of the grants received at the launch of the projects), fell by €0.6 million due to the expenses incurred on these projects, which more than offset the receipt last April of an additional €2.2 million for the Optisochem project.

The cash flow statement mainly reflects the capital increase of €16.9 million last June, of which €604k corresponding to related expenses booked on the issue premium.

Beginning of a shift towards cosmetics

2019 was characterised by the beginning of a shift towards cosmetics. Potential market opportunities in this industry had long been identified – as shown by the partnership entered into with L’Oréal in 2016. Recent changes have increased the depth of this market and bolstered the idea that the cosmetics industry could offer significantly higher prices for isobutene derivatives than those identified in the fuel sector. These changes are related to consumer demand for natural and more environmentally-friendly products. This quest for naturalness is particularly visible in the area of cosmetics where there is even a sense of urgency since the sector is subject to new regulations limiting the use of certain fossil-based products. The fact that L’Oréal, world leader in cosmetics, is now the Company’s biggest shareholder is an undeniable illustration of these changes.

A capital increase operation through a public offering and removal of the preferential subscription rights was launched in June raising a total of almost €17 million. This operation resulted in 3,639,475 new shares being issued, with an investment of €7 million by the BOLD Business Opportunities for L’Oréal Development fund and that of €1.4 million by the CM-CIC investment structures, which already had an 8.3% share of Global Bioenergies equity.

A new milestone achieved in the ISOPROD project

The Company and IBN-One achieved a milestone in July as part of the ISOPROD project funded by ADEME. As a reminder, this project focuses on the emergence of the first operating plant for the Global Bioenergies process. Achieving this milestone has resulted in the payment in October of €3.1 million to the Group in the form of repayable advances.

For synergy reasons, the activities of Syngip BV, the Company’s Dutch subsidiary, have been transferred to the Evry laboratory site during the first half of 2019. Continuing this transfer and in order to reflect it in legal and accounting terms, a cross-border merger between Syngip BV and the Company was agreed in principle by the Board of Directors at the end of 2019. The legal formalities are currently ongoing. This transaction has no impact on the Group’s consolidated financial statements.

Global Bioenergies is the only company in the world to have developed a conversion process for renewable resources (residual sugars, agricultural and forestry waste) into isobutene, one of the petrochemical building blocks that can be converted into ingredients for cosmetics, petrol, kerosene, LPG and plastics. Global Bioenergies continues to improve the performance of its process, conducts trials on its demo plant in Germany and is preparing the first full-sized plant in a Joint‐Venture with Cristal Union. Global Bioenergies is listed on Euronext Growth in Paris (FR0011052257 – ALGBE).

[1] The annual financial report will be issued later in April and the certification of the financial statements will take place at that time.

Menu
We use cookies to guarantee you the best experience on our site. If you continue to use the latter, we will consider that you accept the use of cookies.OkLearn more