GLOBAL BIOENERGIES: PUBLICATION OF THE HALF-YEAR RESULTS TO 30/06/2018

GLOBAL BIOENERGIES: PUBLICATION OF THE HALF-YEAR RESULTS TO 30/06/2018

Evry (France), 20 September 2018 – Global Bioenergies (Euronext Growth Paris: ALGBE) has published its half-year financial statements to 30 June 2018, audited and adopted by the Board of Directors at today’s meeting.

The full report presenting the Company’s and the Group’s business and accounts for the first half of 2018 is available from the Global Bioenergies website, under the heading “Investors/Regulated Information”. 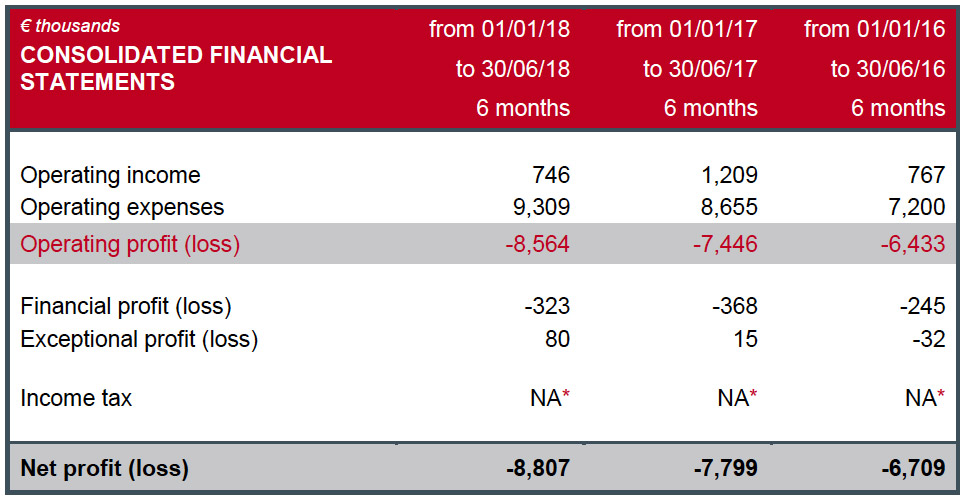 * Note: by convention, the Group does not record a research tax credit in its half-year financial statements at the end of June.

For the most part, operating income is derived from the five European subsidies granted to Global Bioenergies in 2017 and 2018, totalling more than €12 million. These are all aimed at adapting the process to the use of new substrates (mainly wheat straw and wood chips).

The increase in operating expenses (+€0.65 million) is mainly due to the depreciation of the Leuna demo plant (+€0.83 million), which was only recognised for three months in the first half of 2017; the other expense items remain broadly unchanged.

An analysis of the consolidated financial statements reveals the following main changes:

– decrease in non-current assets resulting from the depreciation of the Leuna demo plant, despite an increase in financial assets (European subsidy guarantee for the Rewofuel project to convert wood chips into isobutene derivatives);

– increase in cash position (which, when restated for payables and receivables due within one month, is more than €11 million, as announced in June);

– increase in “payables and deferred income” items following receipt of the Rewofuel advance paid by the European Commission for all project partners; Global Bioenergies, as coordinator, received funding for the entire consortium and is responsible for distributing it.

The significant impact of the change in working capital leads to positive operating cash flows. Cash flows from investing activities, except for a few minor equipment purchases, consist of the recognition of the Rewofuel subsidy guarantee as a financial asset. The new repayable advance of €1.1 million received from the French Environment and Energy Management Agency (ADEME) is partly absorbed by loan repayments (€923 thousand).

Validation of the main market applications of isobutene

The batches produced in Leuna have been used to test market applications in a wide variety of fields, such as motor fuels, cosmetics, materials, aeronautical fuels and even domestic gas. The tests are conducted in association with the leading manufacturers that Global Bioenergies works with, such as Audi, Butagaz and Clariant.

Measurement of the associated ecological benefits

The ecological benefits of Global Bioenergies processes are measured both on a global scale, through the reduction of CO2 emissions, and on a local – and, more importantly, urban – scale, through the reduction of fine particle emissions from petrol engines. In the case of ETBE, a common petrol additive made from isobutene and ethanol, the measurements indicate that the first commercial plant will reduce CO2 emissions by almost 70%. The results for fine particle emissions are just as encouraging: incorporating around 20% of isobutene into conventional petrol would reduce emissions by about 40%.

The Global Bioenergies Group now has five EU-funded projects, four of which granted in the first half of 2018, for a total of more than €12 million. It also continues to receive support from the French government through the “Investissements d’Avenir” funding programme (in the six months to 30 June, €1.1 million was received upon reaching a milestone), and through tax breaks for future customers, since renewable isobutene derivatives have been officially added to the list of biofuels eligible for tax incentives.

As Samuel Dubruque, Chief Financial Officer of Global Bioenergies, explained, “2018 saw the turning point between technological development and commercial release. We are handling this transition very carefully: the financial statements for the first half, indicating broadly stable expenditure, reflect this.”

Marc Delcourt, co-founder and Chief Executive Officer of Global Bioenergies, concluded by saying that “many governments have made environmental pledges in recent years. But tackling global warming and improving the air quality of cities is not easy, and these pledges are yet to take effect. Our unique innovation is at an advanced stage of development and will drastically reduce CO2 and particulate emissions from cars and aircraft. This practical solution will be based on existing infrastructure, will not require major investment, and will therefore enable governments to honour their pledges without weakening their financial position.”

Global Bioenergies is one of the few companies worldwide, and the only one in Europe, that is developing a process to convert renewable resources into hydrocarbons through fermentation. The Company initially focused its efforts on the production of isobutene, one of the most important petrochemical building blocks that can be converted into fuels, plastics, organic glass and elastomers. Global Bioenergies continues to improve the performance of its process, to operate its demo plant in Germany, and to prepare the first full-scale plant through a joint venture with Cristal Union, named IBN-One. Global Bioenergies is listed on Euronext Growth Paris (FR0011052257 – ALGBE).