Evry (France), 1 March 2019 – Global Bioenergies (Euronext Growth: ALGBE) released its 2018 financial statements, audited, certified and approved by the Board of Directors Meeting held yesterday[1]. These yearly figures report a net loss of €13.6m for the 2018 financial year, a slight improvement over 2017, and a cash position of €10.3m as at 31 December 2018.

Samuel Dubruque, Chief Financial Officer of Global Bioenergies, explained: “For the first time in the Group’s history, the net loss is slightly improved over the previous year. This trend will continue in 2019, and points to profitability within four years. The hardest part is behind us, particularly in terms of capital expenditures. Now, the Group’s number one objective is the emerging of its first commercial plant, IBN-One, a joint-venture with Cristal Union.”

Marc Delcourt, Chief Executive Officer of Global Bioenergies, added, “Significant progresses have been made in the performances of the Isobutene process and its scaling-up. Along with this technology push, there is a very clear market pull: for regulatory reasons, the cosmetics industry is facing the progressive phase-out of volatile silicones, for which isobutene derivatives are substitutes. Several letters of intent have been received from major players in the cosmetics industry, representing up to 10,000 tons of product annually, with a guideline price of €4 to €10/kg.

Beyond the cosmetics market, the Isobutene process has the potential to shift the lines of the energy and environmental transition, which is now clearly one of the primary concerns of today’s societies. Western consumption patterns cannot be generalised to a human population of 10 billion individuals, and we all know that radical changes will happen. Letters of intent totalling up to 55,000 tons per year of renewable gasoline and jet fuel have already been received from industrial leaders in these energy markets, the equivalent of more than 1% of French fuels, and in excess of the maximum capacity of the future first plant.” 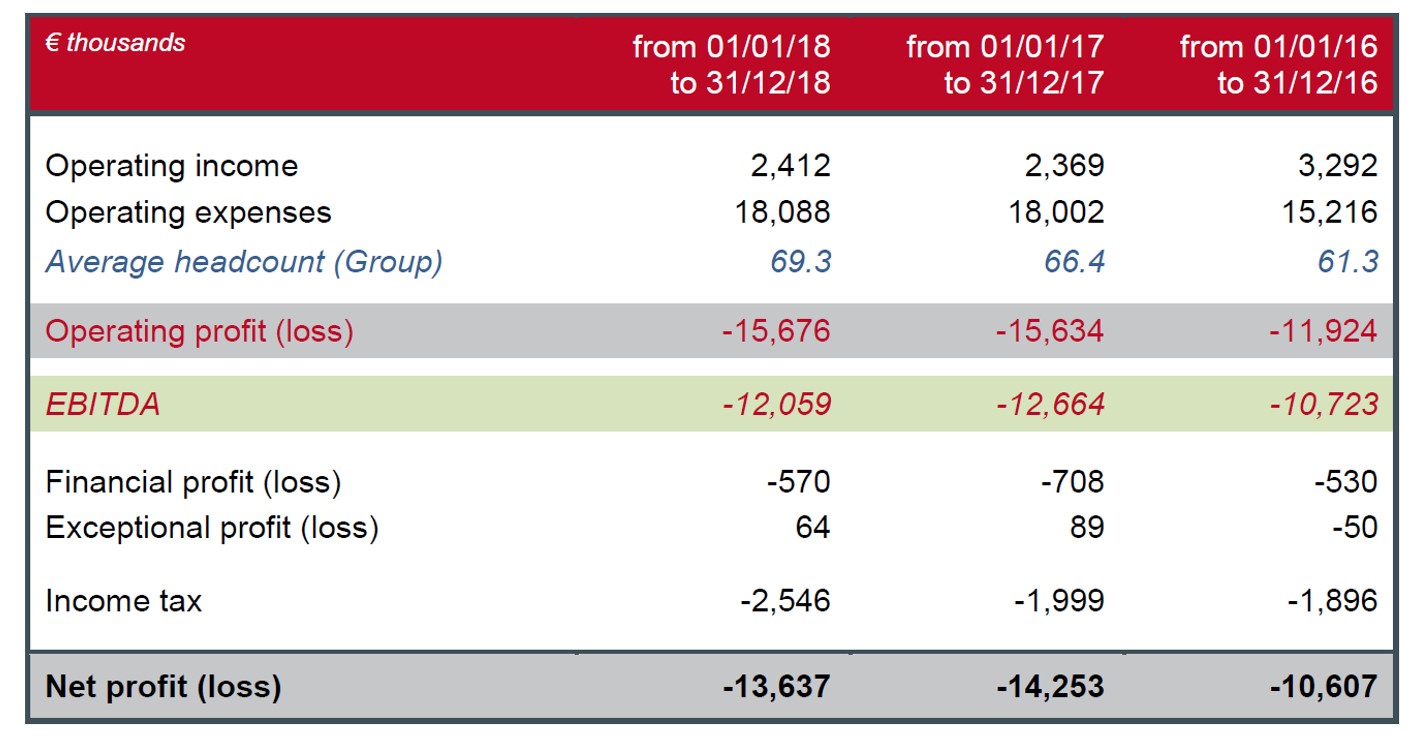 Operating revenues are made up of European subsidies related to diversification projects for resources usable in the Isobutene process, and revenues from partnerships with the car manufacturer Audi after the achievement of a number of new technical milestones. 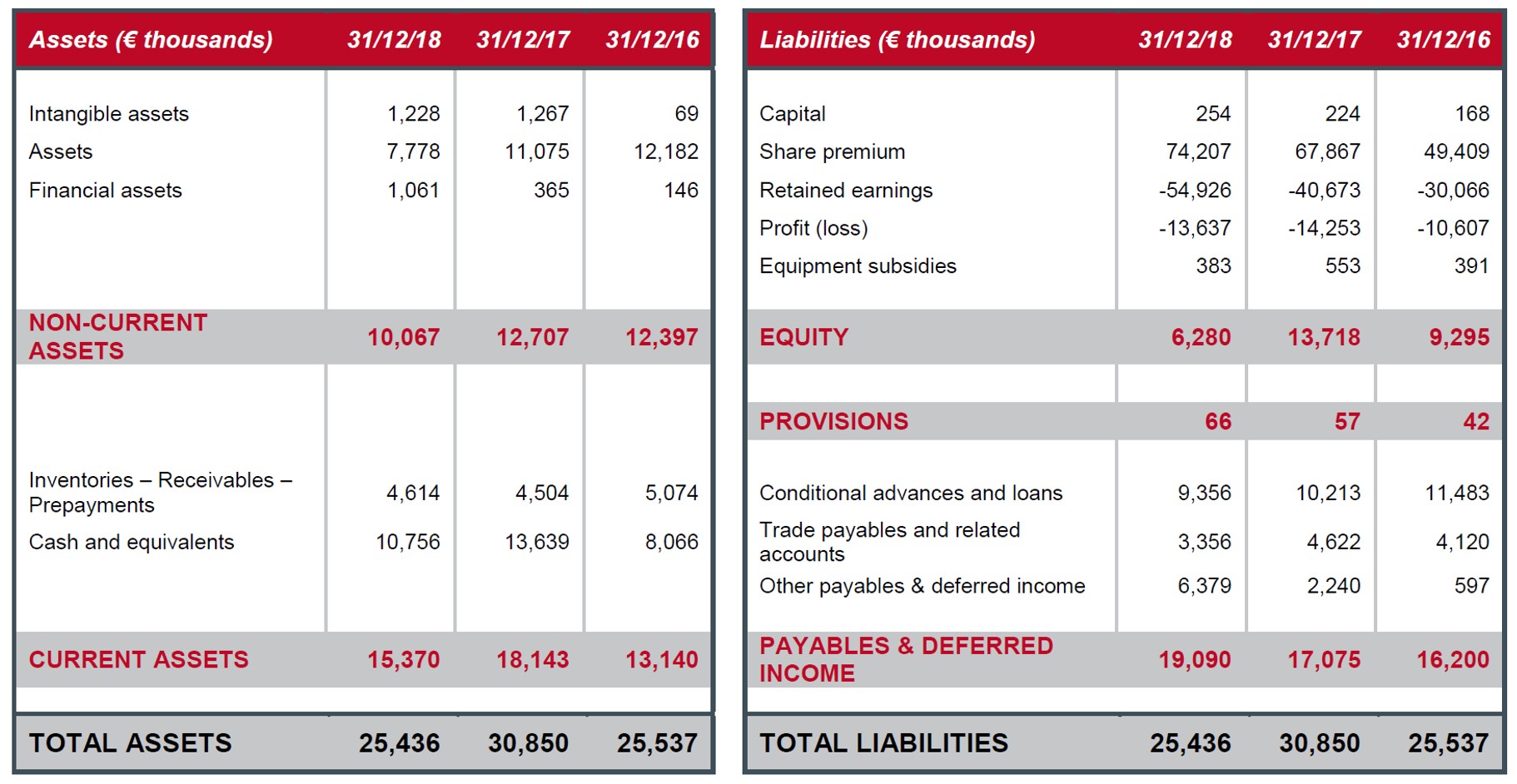 The balance sheet reflects a certain number of changes from 2017 to 2018, particularly due to the granting of European subsidies given during the year:

– deferred income has significantly increased due to the receipt of pre-payments, with about half of the subsidies coming under pre-financing at the launch of the projects;

– we logged €0.7m in surety bonds on financial assets;

Tangible Assets slipped by €3.3m due to physical investments limited to only €0.3m in 2018, while depreciation was booked at €3.6m, including €2.9m alone for the Leuna Demo plant.

Although the Group had otherwise received a new repayable advance of €1.1m as part of the ISOPROD project financed by the ADEME; reimbursements of loans and repayable advances for €2m made it possible to reduce this debt heading.

Cash flow pertaining to funding business activity was dominated by a capital increase of €6.2m in September.

Validation of the principal market applications for isobutene

Product batches at Leuna were used to test market applications in very diverse fields, such as automotive fuels, cosmetics, materials, aviation fuels and even household gas. These tests were conducted in collaboration with key industrial players, such as Audi, Butagaz, or Clariant, with which Global Bioenergies has established partnerships. The appeal of these different markets materialised at the end of the year with the receipt of intentions to buy exceeding the production capacity of the first plant (IBN-One), a significant portion of which concerns high value-added markets (cosmetics and special fuels).

The ecological benefits of Global Bioenergies processes can be measured on two scales: globally through a reduction in CO2 emissions, and then on a local and specifically urban scale through a reduction in fine particle emissions from petrol engines. In the case of ETBE, a well-known petrol additive produced from isobutene and ethanol, measurements indicate that savings in CO2 emissions should reach 70% with IBN-One. Validation of the reduction in emission levels of fine particles was also obtained: incorporation of isobutene derivatives in traditional petrol would reduce emissions more than proportionately.

The Global Bioenergies Group as of now counts 5 projects that have received European subsidies, 4 of which having been granted during the first half-year of 2018, providing the Company with a total of more than 12 million euros. It continues to benefit from the support of the French government through the Investissements d’Avenir program (1.1 million euros received during the first half-year after reaching a key milestone). On top of that, the derivatives of renewable isobutene were officially added to the list of biofuels eligible for tax incentive schemes.

Global Bioenergies is the only company in the world to have developed a conversion process for renewable resources (residual sugars, agricultural and forestry waste) into isobutene, one of the petrochemical building blocks that can be converted into ingredients for cosmetics, petrol, kerosene, plastics and elastomers. Global Bioenergies continues to improve the performance of its process, conducts trials on its demo plant in Germany and is preparing the first full-sized plant in a Joint‐Venture with Cristal Union. Global Bioenergies is listed on Euronext Growth in Paris (FR0011052257 – ALGBE).

Manage cookie consent
To provide the best experiences, we use technologies such as cookies to store and/or access device information. Consenting to these technologies will allow us to process data such as browsing behavior or unique IDs on this site. Not consenting or withdrawing consent may adversely affect certain features and functions.
Manage options Manage services Manage vendors Read more about these purposes
View preferences
{title} {title} {title}